Turn on suggestions
Auto-suggest helps you quickly narrow down your search results by suggesting possible matches as you type.
Showing results for
Search instead for
Did you mean:

My course mostly consists of screencasts. When I export the edited video from iMovie, I feel that 4K quality looks best. Even 1080p looks slightly blurred. But the file sizes of 4K videos are too huge. So I'm not sure if they are recommended.

Any suggestions from instructors who mostly do screencasts?

Udemy has decided on a one-size fits all strategy for video and only displays a maximum of 720.

Unless you are watching the videos on a 65" 4k television, you will not be able to see anything more than 1080HD. Udemy does not transmit anything in 4K and most courses are watched in 720. You are only using up space on your hard drive. 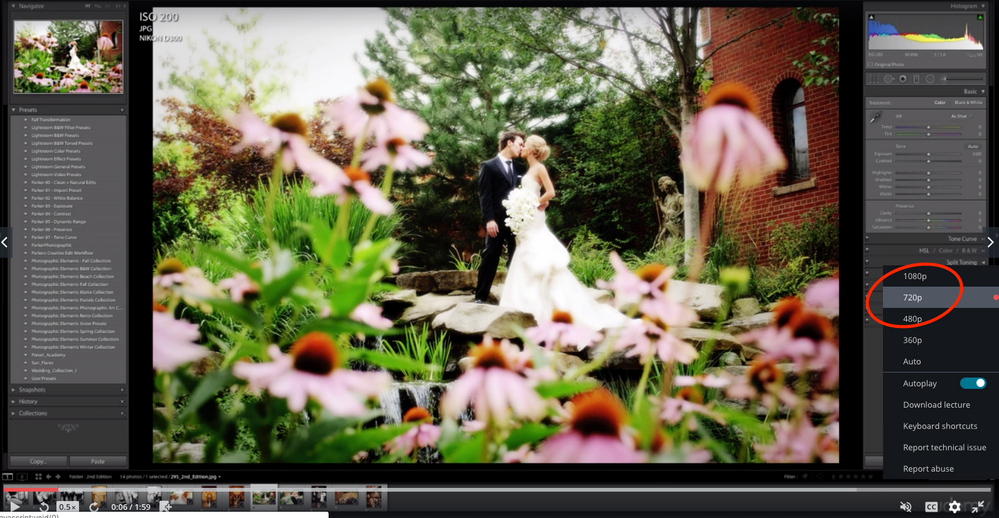 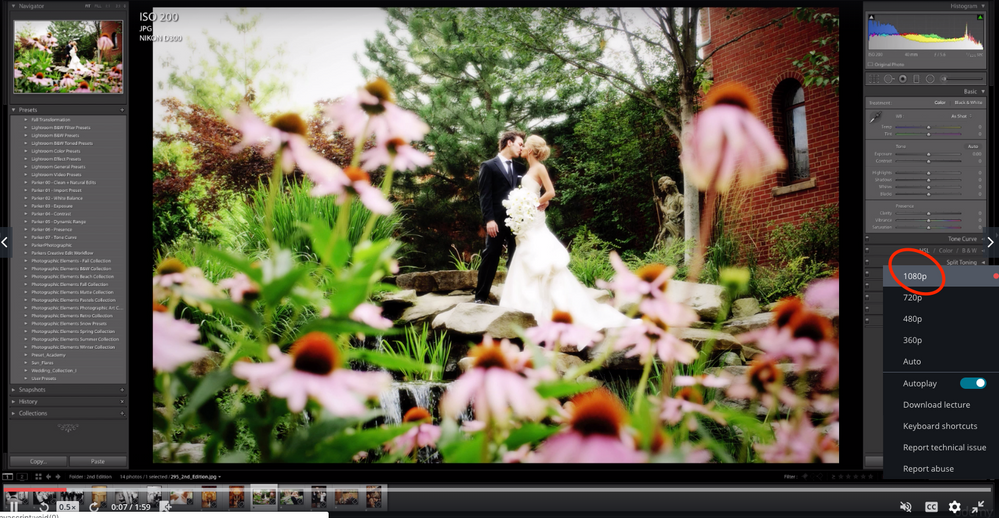 We often capture in 4K, because we are usually capturing hi-res Mac screens, or 4K native monitors in Windows. Pulling down the resolution makes for slightly blurry captures.

We will often zoom in on certain parts of the screen to show details, and if we captured in 720p or even 1080p, the zooming gets quite blurry, especially after the compressing during rendering.

In Windows, you can increase the the scale size, and I'll usually set it to about 200-225% on a 4K monitor (see picture). This way, I can keep a nice, sharp screen capture, and have the resolution to be able to zoom in during post-production. 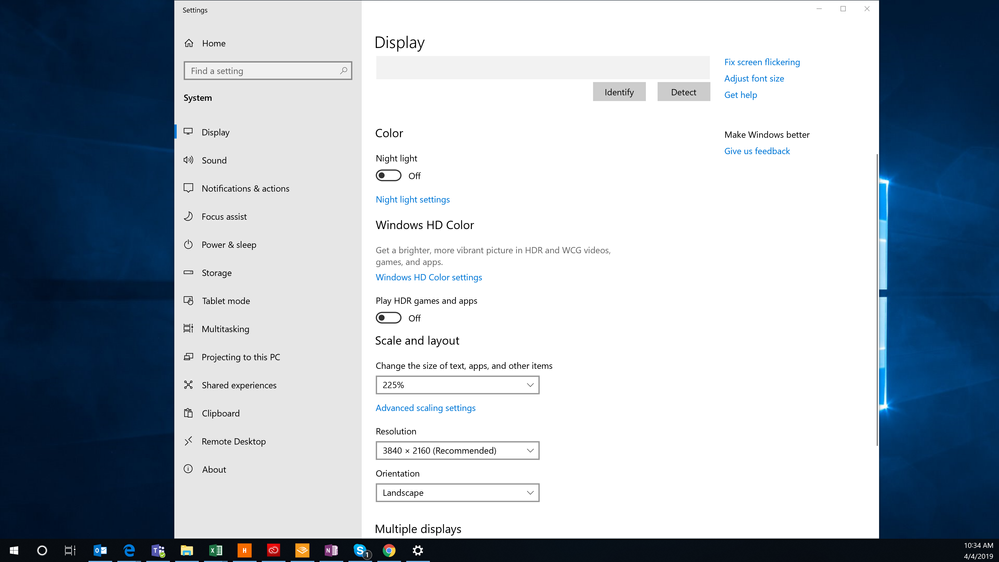 Is there such an option as "scale size" on Mac?

I'm not as familiar with Macs, but a quick Google search found this (see picture below). You can read on the website here.

Unless you are watching the videos on a 65" 4k television, you will not be able to see anything more than 1080HD. Udemy does not transmit anything in 4K and most courses are watched in 720. You are only using up space on your hard drive.

Another post (today) is saying the problem with1080p quality. 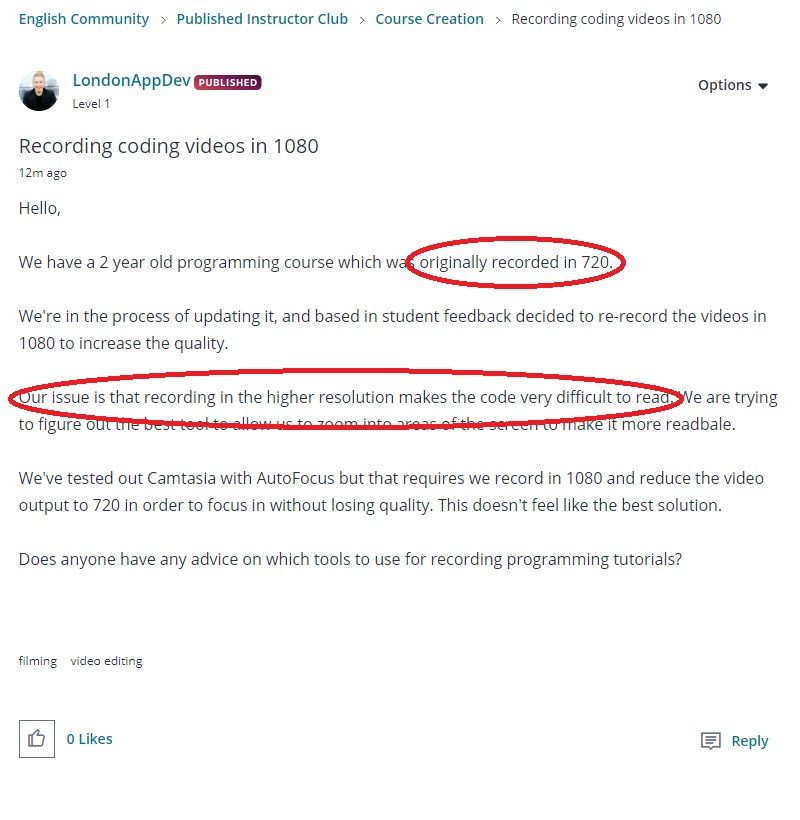 Well, I started recording in 4K and those are only screencasts. I am sorry, but I think Udemy should support 4K. Because you can still use something lower if you desire it.

Also the fact that the courses are still in 720p in the year 2020 bothers me. Please change that. It would lift the quality of this platform. I know you can get HD when you ask the support for it, but it should be default.

I have 4K smartphone but recording support 720 Pixel, I really disappointed with this.

Are you watching courses on a 65" 4K television? No. 4K is irrelevant. You can't see the difference between 4K and 1080p on any computer screen, tablet or cell phone. It is a huge waste of bandwidth and storage space.

Wow, sorry, but I have to contradict.

There exist some 24'' monitors and many 28'' monitors with 4K resolution and people with normal eyes quite see the difference.

I can accept that you are not yet ready for 4K, but having 1080p enabled would be nice at least.

Also about wasting bandwidth, you might want to check out x265: https://www.macxdvd.com/mac-dvd-video-converter-how-to/x264-vs-x265.htm

Anyways thanks for your humble opinion.

OK. But... I have a 65" 4K LG OLED TV and I can switch from football game being broadcast in 4k (few of them) and one that is in standard 1080p and can only tell the difference if I look VERY closely. Also, note that a high percent of Udemy students (it is either 40% or 60%) are watching on their cell phones.

If you want to record in 4k that is fine. I have a 4k camera and when I record a file in 4k it is a much larger file than when I record in 1080p. I am aware that computer monitors, particularly Apple's, are being marketed as 4k but I would still argue that most people will not see the difference.

I understand your point with the TV as an example however the difference between 4K on any LED TV and a Retina screen is absolutely noticeable and pixels visible even from a fair distance.  The pixels of 'Retina' however are imperceivable to the naked eye at any point (hence 'Retina').  It's completely crisp.

I own the 65" inch LG OLED65W9PLA / LB too, though the difference  to Retina is perceivable on any similar TV.  Despite being happy with it I was disappointed with the close-up clarity of my OLED tv as an experienced user of Retina - even when viewing the fully fledged 4K demo vids of the mountains and the honey dipper and the like.  It's quality TV, but it's not Retina (or comparable alternatives).  A 65" Retina would cost a fortune at this time.

The good news is, if you haven't seen Retina, Super-Retina or XDR, in 'big', you're in for a treat.  It transformed my working life.  It's why I invested in an iMac 6 years back and it impresses still to this day and completely outshines even my TV which as you know, as right up there as one of the best - if not the best in its category.

Vast resolutions aren't needed for most smaller mobile devices, but the technology is moving thick and fast. Retina has been implemented on computers since 2012.