Help
Log In
Turn on suggestions
Auto-suggest helps you quickly narrow down your search results by suggesting possible matches as you type.
Showing results for
Search instead for
Did you mean:

The story of me earning $1k+ for the first time on Udemy.

This is the story of my journey on Udemy to earning my first $1000. This post is almost long overdue. I wanted to write this post at the start of Aug, but I got very busy with my next course.

I am going to start at the beginning.

I graduated from university majoring in Mechanical Engineering in 2015. I had no idea where my life would take me five years later. Having found no job in Afghanistan and desperate to work, I found myself teaching 4th, all the way to 10th graders at school. I started teaching basic computer skills and the English language. In a matter of five months, I wrote six books on office and some necessary software. There were no books in the school curriculum of Afghanistan for computer so I had to come up with some to teach.

Right after the school year ended, I found myself diving more and more into computer science and software engineering. I learned HTML, CSS and JavaScript in just a month and started teaching them by the end of 2015. I think I binge studied them. These technologies were like nothing I had encountered before. I mean I had learned 2D and 3D modelling in AutoCAD, SolidWorks and Pro-E along with 2D and 3D analysis of Structures in AnSYS when I was in university. But, HTML/CSS/JavaScript had very different tones to them. After a year of studying and teaching at schools and universities, I became a full stack web developer. It was such an honor and an incredibly challenging task in Afghanistan at the same time.

It was the start of 2017, where I thought of getting a scholarship and take my skills to the next level. So, I decided to take the TOEFL test and I did. It was almost the same time when I started having chronic lower back pain. I was studying more and more everyday and the sitting was killing my lower back. I was sort of an athlete when I was in university. I ran a lot and did bodybuilding as well. But sitting made me familiar with the physical pain. It has been 3.5 years and I still get the pain but it is not chronic anymore. It comes and goes. Last year I went to Kabul and visited a doctor among other doctors over the years. He was the first one to tell me that I have a spinal abnormality. I have an extra lumbar vertebra, a sixth one like there were not enough already. And that guy is causing the pain. He told me if I am not careful, I might end up with a spinal surgery. It is very difficult to be careful about your health and program at the same time and live in Afghanistan with no resources at all.

Anyway, I did not let the pain stop me and self-studied TOEFL, which was nothing new at that time (the self-studying part) and scored 98. I could not get any scholarship and one year passed. It was start of 2018 when I found a scholarship to study in Japan. I studied IELTS and scored 7.5 and I still did not get the scholarship. I realized, if there is anyone or anything that is going to change my life, it has to be me, no scholarship, no nothing. So, I started studying Data Science and Machine Learning which was really interesting for me and still is. But what I got from the Japan scholarship was the light of my life, I met my wife who is the best scholarship I can get and got married after 5 months. In the march on 2019, I hurt my knee badly. Multiple injuries. Torn meniscus, torn ligament, displaced kneecap and a few minor ones. I could not afford knee surgery so I let it heal itself. It did heal to some extent, but in the process, I hurt the left knee. Subsequently, I suffer from pain in both of the knees and the back every day.

It was towards the end of 2019 when I stumbled upon Udemy and the idea of teaching on Udemy. It took a month to create a compartment to record. It was in the preparation for teaching on Udemy that I understood the true meaning of difficult. I searched for days on in my city and other cities and I could not find any good microphones to record. Finally, I found used (second hand) headphones just to realize my laptop does not record well. I must have changed the OS tens of times along with the drivers but nothing changed. I had saved almost $1.5k and I had already spent $600 on the compartment and bought the laptop for almost $950 (borrowed 50 bucks). The laptop is quite fast. Intel core i7+ (12 CPUs), 16BG Intel Optane Memory (IRST), 8GB physical RAM and 1TB HDD and 2GB dedicated GTX graphics. The laptop can handle mountains but not recording apparently. So, I decided to record the audio on my smartphone and synchronize it with the video. This is when I brought my brother into the equation. He is very good with the Adobe Realm and is also working on his Udemy courses. So, that’s how it all started.

Here is me sitting in my 1.5m by 2m studio built with the technology of 21st century in Afghanistan.

Nonetheless, the most challenging problem was yet to come. It was the month of Feb of 2020 when I was hit the hardest in my entire new life (development). The Udemy website was blocked in Afghanistan. The reason that this was the strongest punch thrown at me, was the very fact that I could not do anything about. I checked all the ISPs in Afghanistan and nothing could open Udemy. I could log in through some kind of VPN service, but I was not about to do that because I thought doing that is unethical and I might get banned from the platform. So, naturally, I got depressed. I did not eat for days and stopped working and studying altogether. I drowned into the horrors of not being able to change myself, my life and the life of people around me for the better. I tasted the bitterness of this world. I sank into the notion that I am good for nothing and no matter what I do, life in Afghanistan will always prevail over me. It was the worst weeks of my life. My wife helped a lot and never gave up on me, encouraged me as always, but I was drowning deeper that even I had realized.

After almost a month, one day my wife told me that Udemy is working again and I could log into my account once more. I remember the moment clearly. It was like someone blew life into my lungs again and I was able to breathe again. I was hit the hardest because when I saw Udemy and the potential of having a wonderful life, I was mesmerized. I knew at that moment that teaching on Udemy is what I want to do for the rest of my life. I had a clear picture of my life’s purpose and why I was born.

The first course was published on Apr 6th and after two days I earned $20 with no prior online presence including YouTube, Facebook, Twitter, Instagram etc. I removed my Facebook account in 2018. It was basically a waste of my time. My course grew more and more. I got more and more students. On the 31st of July, I released my second course and earned almost $95 in half a day. The courses are growing rapidly and so is my excitement. I teach 57 countries and 312 students in just 4 months.

Here is a screenshot of my earnings so far. I hope I can inspire at least one person in the world. If I can do it in Afghanistan, so can you. 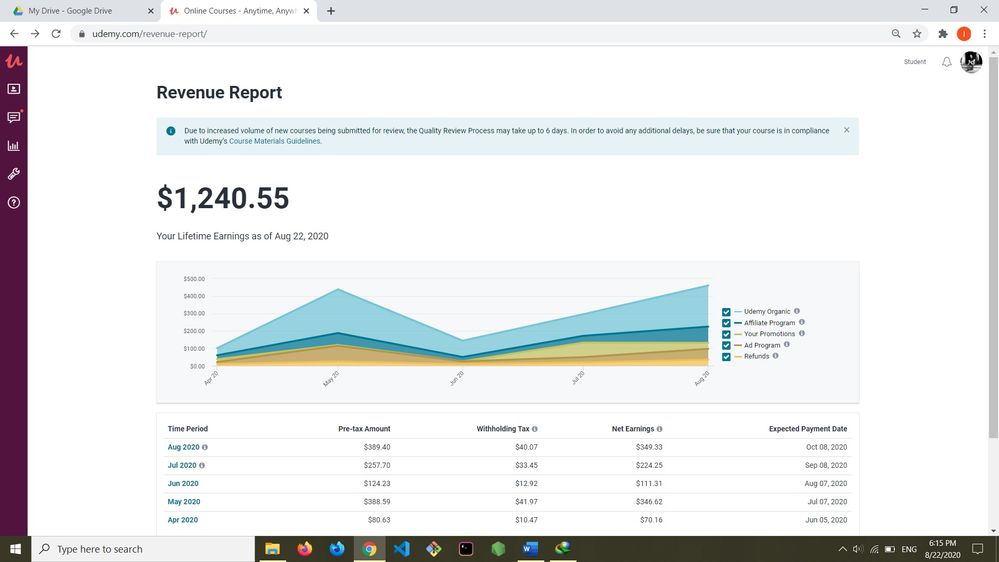 At the end I want to thank dear Abbie and dear ElianaC for being there for me and answering my questions. I also would like to thank the Udemy policy and instructor support teams and all of Udemy deeply for inspiring people around the world and providing opportunities to learn and grow. I also would like to extend my gratitude to all of my fellow instructors and thank you for your posts and guidance. You have helped me a ton, literally.

Ooops, it looks like you’re not a registered Udemy instructor. Want to become an instructor? We’d love to have you!

You can join the Instructor Club after you publish your first course. In the meantime, you’ll find plenty of help and advice in Studio U.