Help
Log In
Turn on suggestions
Auto-suggest helps you quickly narrow down your search results by suggesting possible matches as you type.
Showing results for
Search instead for
Did you mean:
Options

What's Your Audio/Visual Set Up?

I am now contemplating upgrading my current set up of webcam and mid range mic.

I would like to spend some money on investing in a camera, mic and some lighting with a backdrop.

What is your current set up it terms of camera and mic, plus what lighting fo you use?

Really intersted to know before I take the capital expenditure plunge.

Here's the basics of what I use.

I use an Ipad as a camera that has a Rode Lapel mic plugged into it via the 3.5mm port which provides HD quality video and great sound (the Rode mic is fantastic).

As far a lighting goes I've got 4 Pro Softbox lights to light the area I record in.

@LawrenceMMiller: You will find a huge range of responses in terms of the sophistication and expense of the equpment that instructors are using. I suspect that I am somewhere in the middle. Here are two photos of my office/studio. One is from behind the camera, the other looking toward the camera from where I stand. 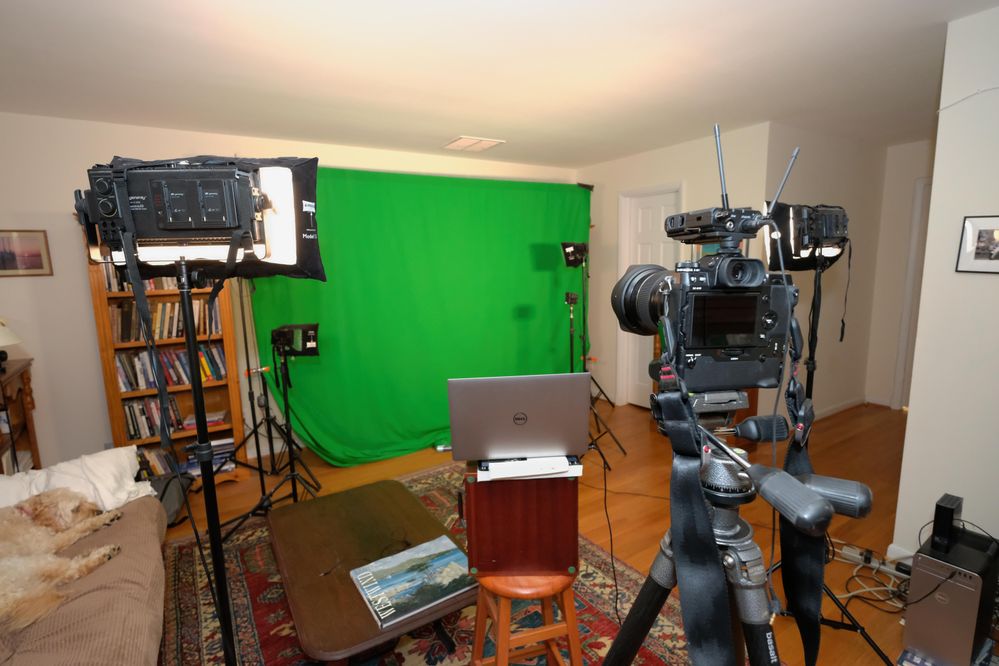 Obviously, I use a green screen and insert a background photo in editing. Here is my gear breakdown.
I have been using a Fuji XH1 camera with a variety of lenses, usually the 16-55/f2.8 set to f5.6 and a custome K scale level (3300) to match the lights, auto focus off and auto white balance off. I recently acquired the new Nikon Z7 and I may use that for my next course. I use a laptop for a teleprompter, but that is just to give me an outline or a graphic, which I use a lot of, to remind me of my key talking points.
I use a Sony URX-PO3 wireless receiver and transmitter. This is a relatively expensive unit ($500) but I went through several other cheaper units and they kept failing for one reason or another. This one is excellent.
Lighting is probably the most critical element of your set up. I have four  Generay Spectra 500 bi-color lights. These allow you to adjust the color temperature of the light. Two are in front of me and two only illuminate the green screen. I have two smaller lights that are above and behind my head aimed at the back of my head, this eliminates the glow you can get around your head. These aren't shown in the photos.
Oh, notice my mascot, Bella on the couch. Very imporant. This is her position while I am filming so she isn't looking out the window downstairs and barking at people or dogs walking by. Hate that! 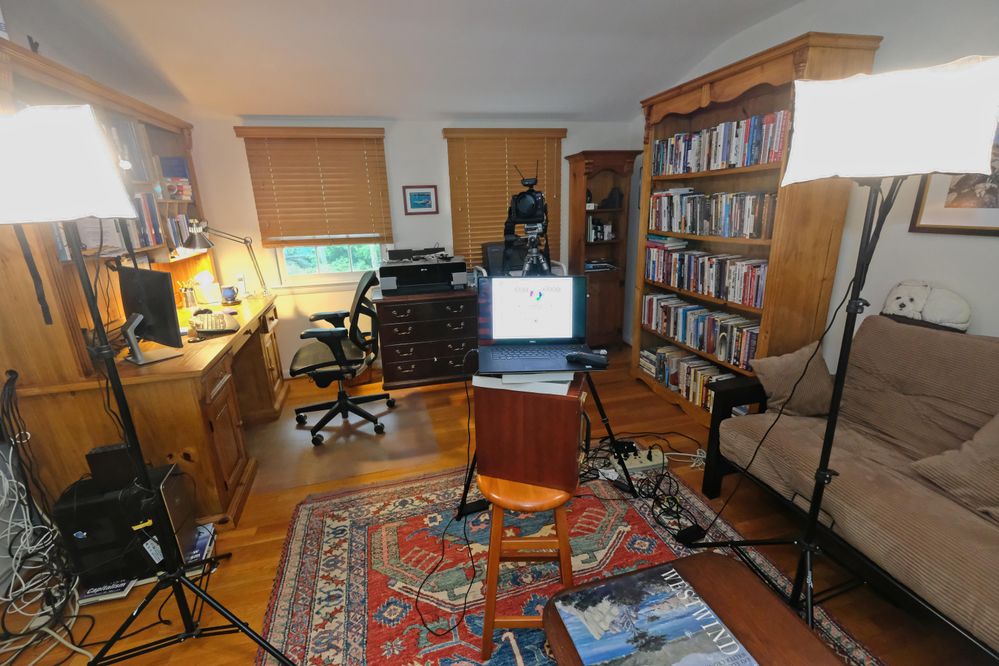 @KylePew: I started out with a logitech webcam and a couple of small lights. After a couple of courses I upgraded to using a Sony A6000 with a Sony ECM-GZ1M mic in the cameras Multi-Interface Shoe. I also purchased a simple retractable green screen, from Elgato. When I made the upgrade I also changed from using Camatasia to OBS. OBS is super easy to use with the green screen adjustments. I recently upgraded to a Sony A6400. This camera gives me more options as far as microphones are concerned as the A6000 didn't have a Mic input other then the Multi-Interface slot at the top of the camera. My lighting has also changed over time, I now have a couple of LED panel lights to light me and the green screen.

For camera, I use a Sony AX53 camcorder or Sony A6400 camera. On either I use Rode Mics. Either the Rode Lavalier microphone (about £40) or the Rode VideoMicro (about £40). Obviously the cameras I mention here are quite expensive, but the microphones are reasonably priced.

For lights, I use the 'Neewer 3 Packs Dimmable Bi-color 480 LED Video Light and Stand Lighting Kit - LED Panel (3200-5600K) with U Bracket Light Stand for YouTube Studio Photography Video Shooting' (about £150 for 3 lights plus stands. You can buy them cheaper individually if you don't need 3)

I used to use softbox lights which were much cheaper (about £40 for two plus stands), but they take up a lot of room.

I rarely use green screen, but do have a green screen setup I can use if I want. It was quite cheap (about £35) to purchase the set which included green screen plus white, black and red and the frame, which at it's largest is  2m x 3m.

I also have a teleprompter. I don't use it often. It was about £80 and you put your tablet device lying down on it and read off (using any free 'teleprompter' or 'autocue' app) the slanted perspex which is in front of your camcorder. It fits on the tripod and you put your camera on the telepromper.

@AliciaPaz: I've made some upgrades recently, not sure your area but I also initially used Omni which is an app where you can borrow stuff and tried a DSLR first.  I made an Amazon list of what I use/have used- not an affiliate link below, a wide range of items and all pretty cheap.  I started with an iPhone 7, $9.99 lapel mic and a $9.99 app (ProMovie.)

Current set up is a lighting kit; 2 on tripods and umbrellas and one softbox on a tripod, blue ICE mic which is bungee corded to another tripod with a pop filter.  I use a Canon DSLR as well which has made a huge difference in quality.

My basic kit for social media and promo is that I use my iPhone and a ring light that attaches to it.

I don't use a green screen and my videos are all talking head (it's less ego and more that I am a therapist!) and I have this as my background in all videos.  I also use Mac products so I also have 23029508 adapters due to the C-port. 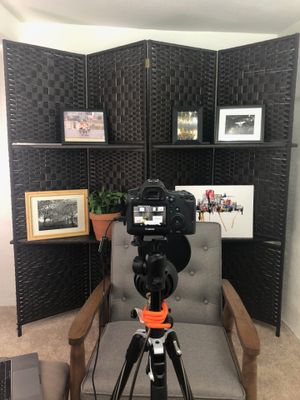 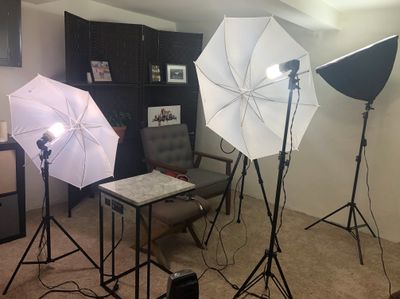 I should add I also have a room I use as a studio with no windows (3/4 basement) and white walls so lighting is easy as is sound.  And to prevent echo I have a mattress against a wall- it might also be my never used guest bedroom so it also has a dresser and nightstand to the sides.

If I had to choose what to buy looking to upgrade presuming someone's set up is alright, to begin with; mic > lights > camera

@GregReverdiau: I just finished construction of my home office/studio. This is my setup. 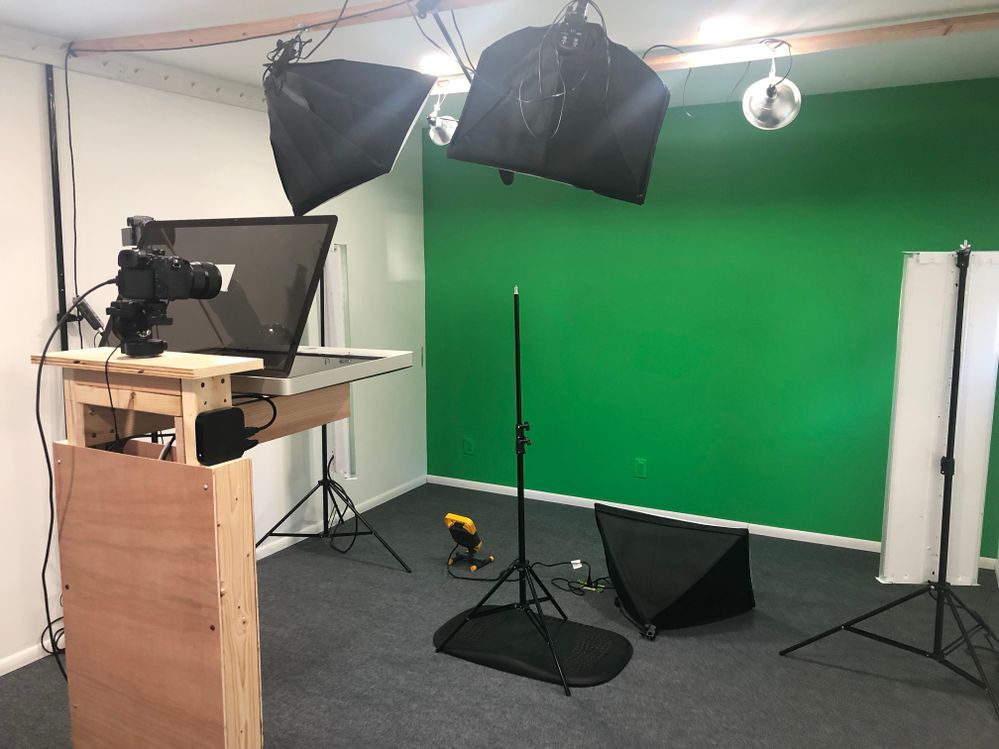 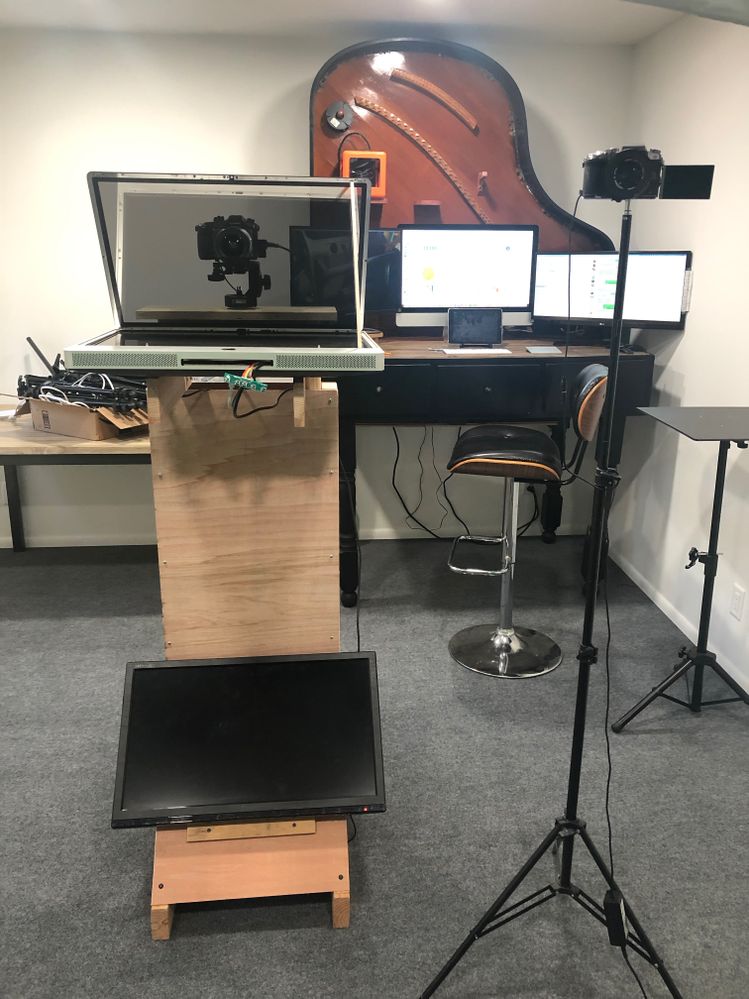 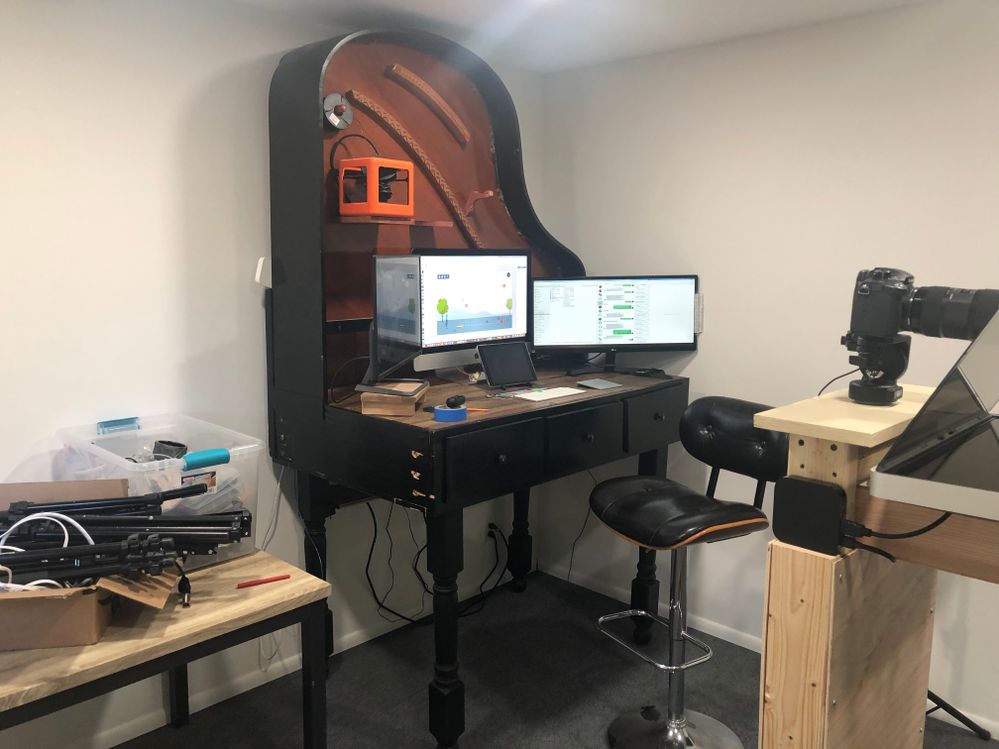 Greenscreen on a frame and stand

Auna USB MIC 900B with mike stand and pop filter (might be a different brand in the US) which is a large-diaphragm condenser microphone. The mike is very important because I do screencasts. This mike is simply overwhelming and really makes the difference. This has improved my sound quality dramatically. I used to have a Rode smartLav+ before, but in comparison, the Rode is like phone quality.

Bottom line: mike is king, the rest is nice to have.

@RobinHills: Some of these bits of kit are very impressive.  They may be very off putting to new, inexperienced instructors.

PLEASE do not think that you have to have all this gear to be successful on Udemy.  I started out with a Logitech c690 webcam giving me HD video and a Blue Yeti microphone giving high quality sound.  Together both cost about £150 (~$150 equivalent).  They got me started and established with my courses.

Over the months I have invested my Udemy income in a DSLR camera (Nikon d5600), a Rode Video Pro microphone, a white screen, a lighting kit and a teleprompter.

Having got got my professional kit together, I still haven’t mastered the art of producing great videos that I am 100% happy with!